The following table includes some sailing ship capabilities in the inner solar system, showing payload in metric tons and trip times for two ship sizes.  Sailing ships can complete these voyages and return to Earth for subsequent voyages, operating as an Interplanetary Shuttle.  Sailing ships are expected to have useful lives of roughly 30 years, during which they consume no propellant.

It can be seen from the table that a small fleet of five 2-km ships could deliver 200 tons or more to Mars every 26 months.  This would be the most economical of all methods of supporting an outpost or settlement on Mars.

Ships can depart for Mars at every opposition.  A representative trajectory profile is shown at right.  The ships can arrive at speeds that allow sailing into orbit.  They can also make faster transfers, in less than half the time for a rendezvous, at speeds low enough for aerodynamic braking for entry into Mars orbit or direct descent to the surface.  On the return trajectories, the ships cruise through the asteroid belt making typically two encounters and return to Earth in less than two years.  The ships then have time for servicing and taking on passengers or cargo for the next departure opportunity, approximately 26 months after the previous departure.

Trip times to Mars vary with the payload for a given sail area.  A 2000-m ship could carry 25 tons to Mars in 130-150 days, or 70 tons in about 300 days.  The propellant needed to send 70 tons to Mars by chemical propulsion would cost over $1 billion if carried into orbit by an expendable launch vehicle.

For a two-year voyage, the commercial shipping charges could be roughly $20 to 50 million, which for a 25-ton load averages $1 to 2 million per ton.

Every pair of mutually orbiting bodies has a set of five gravitational equilibrium points (Lagrange points) in their system.  These are illustrated here using the nomenclature established by Lagrange and Euler.

An early solar sail investigator pointed out that a solar sailer kept facing the Sun follows an orbit equivalent to one around the Sun with no sail and a reduced solar mass, that is, the sail's radial acceleration 'cancels' some of the Sun's graviataional pull.  For the pedantically oriented, this means these orbits are precisely Keplerian (Kepler's laws apply precisely).  Some of the currently in vogue use of non-Keplerian is in fact incorrect.  The equation is simply GM' = GM - ac(1AU)2, where consistent units must be used.  When a ship with ac = 5.93 mm/s2 faces the Sun, the Sun has 'no mass' because the Sun's gravitational field is balanced exactly.

This insight led to Wright discovering artificial Lagrange points in the regions of the natural Lagrange points and other points around Earth, where a sailer can remain synchronized with Earth's motion around the Sun.

The set of artificial L2 points is potentially of major importance.  Shortly after discovering the artificial Lagrange points in 1974, Wright realized that a shield could be located in an artificial L2 position to modulate the amount of solar energy reaching a planet and that giant reflectors around the planet could be used to heat it.

The figures at right show the values of ac required to keep a sail at a given distance from the Sun (or Earth) for a sail between Sun and Earth.  The natural Lagrange point establishes the outer limit.  Venus might establish a practical inward limit because of its passage by the Sun-Earth line every 19 months, or it might be practical to keep an Earth-synchronized sail at points even inside of Mercury's orbit. 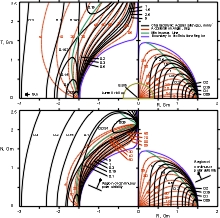 Other regions exist where a sail can be kept synchronized with Earth or other planet.  These balance points exist all around planets except for certain zones.  Sails placed in these positions can be used for illumination, heating, observation and communications.

A map of the terrestrial regions is shown in the figure at left in conventional radial-tangential-normal coordinates.  The ac values are the local field values normalized to 1 AU and adjusted by cos-2 of the angle. (Click to enlarge)

A typical Earth-approaching asteroid comes close to Earth, but also travels out to the inner regions of the asteroid belt.  Sailing ships offer the most economical method of recovering resources from asteroids or short-period comets.  If a 2-km ship was assigned to bring a resource load from such an asteroid to Earth, the load mass can trade off against trip time.

As an example case, with a 2-km ship, a return load of 160 tons takes about five years, based on numerical simulation.  Allowing for maintenance and the outbound trip, a ship could return with 160 tons about every seven years.  Three ships could be linked to carry 500-ton loads in the same time.  Rendezvous trajectories to Apollo, Amor, and Aten class asteroids can often be done in as little as three months.

Mined material could be brought to Earth orbit for use as structural material, manufacturing stock, and inert shielding of orbital facilities for long-term habitation.  Cost of transportation for resources to Earth orbit when operating with the large loads is estimated to be less than $400/kg, which is two orders of magnitude less than the cost of delivery by an expendable launch vehicle.

A sailing ship can deflect an asteroid or comet by pulling it, using a bridle which attaches to physical poles embedded at the rotational poles of the body.  Deflecting a small body is a challenge dependent upon navigational capability.  Before towing begins, the body should have a navigational package installed which may include transponders, celestial navigation, and multi-spacecraft positioning, similar to GPS but on a solar-system scale.  As an example, a 0.1 m/s velocity uncertainty leads to a positional uncertainty of roughly 16 Mm (2.5 Earth radii) 5 years in the future.  Bad navigation at the start of towing could increase the risk of collision instead of reducing it.

As a simpler alternative, the sail(s) could pull on a single attach structure imbedded at a pole. This could induce some precession in the towed body, but probably not enough to interfere with the deflection operation. Two sails with independent tow lines could be used, one anchored at each pole, which would reduce or eliminate the precession.

The towing forces are sufficiently low that comets and 'rubble pile' asteroids could be deflected if sufficiently long rods are driven into the bodies to anchor the tow lines.